After spending some time in Windhoek, the course participants headed north towards the Cheetah Conservation Fund (CCF) training center near Otjiwarango. Dr.Laurie Marker, an expert on cheetahs and who initiated CCF said "hurry up, it's dangerous to drive after dark in Namibia", "perhaps daciots" I thought, but wanted to clarify it with Laurie before I made my conclusions. "There will be kudus, warthogs and other wild animals on the road, and it can be dangerous if you met with an accident" she said. I was a bit surprised, she wasn't worried about vehicular traffic but about 'wildlife traffic'. How true she was. When we got on to the highway there were few vehicles, and as it got closer to evening animals were near or on the road.

There is even a 'Kudu' FM radio station in Namibia, it played some interesting African music. I soon realized that the country revolved a lot around wildlife. Sixteen per cent of the countries GDP was from wildlife tourism! Conservancies (a sort of protected forest areas wholly owned and managed by communities) are set up on communal lands to help people earn revenue from wildlife through tourism and sport hunting. There are strict restrictions on hunting quotas and management. 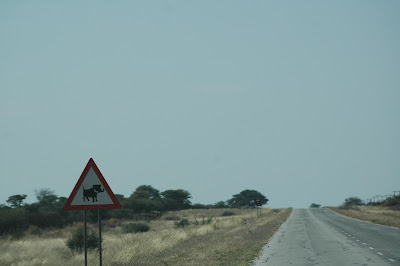 Otjiwaranog shortly called as 'Otji' is a small nondescript town in the north of Namibia about 250 km from Windhoek. By the time we reached Otji it had got dark. One of the course participants Emsie, a Namibian had driven in her Land Rover Defender. My long time fascination for this sturdy 4*4 made me to ask Emsie if I could travel with her to from Otji onwards. Emsie's approval made me to jump on to the navigators seat. To my surprise the 4*4 was packed with almost everything: a tent, jerry cans of water, food, etc. I was later told by Emsie's husband Chris that people in Namibia are always ready for everything as they never know when they will see the next vehicle on the road if something went wrong with theirs, especially when they are in remote areas.

Once we left Otji we were on a 'gravel road', "this is how it is in most parts of the country" said Emsie. Though we lost the team we managed to reach the dormitory 'Cheetah View' but to our surprise they had not yet arrived there. A frantic search to get mobile signal finally yielded results after driving for a couple of kilometers and me climbing on to the top of the defender. The team had gone to main CCF center for dinner and we had to wait till they returned. A 'donkey' (Gujarat boiler) had fire in it and kept us warm in the cold. Meanwhile I got to know about Emsie a bit who worked in a wilderness safari lodge in the western side of the country.

The course started the next day with an introduction to their captive cheetahs. Participants had come from Botswana, South Africa, Ethiopia, Kenya, Namibia, Iran, USA, Zambia and the two of us from India, Priya Singh and me. 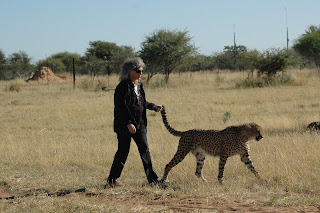 Dr.Laurie Marker with a captive cheetah
The course went on for 15 days with several subjects being taught both in classroom and in the field. Visits to farmers who were affected by predators and those who implemented predator-friendly livestock management, interactions with wildlife department officials, veterinarians, academicians were all part of the course. The CCF farm is 44,000 ha. (440 sq km, bigger than several of our protected areas in Karnataka!) of bush, and had several wildlife species on it. Oryx, hertebeest, kudu, porcupine, African jungle cat, spring hare, leopard, cheetahs, aardwolf, bat-eared fox and several other interesting species.

Cheetah View dormitory was basic with "special showers" closed on three sides, a thin green net covered one side and was completely open to the starry African sky. A donkey boiler supplied hot water heated by briquettes, but took a while to heat up. I had to fight with the boiler every
morning to ensure we had hot water. It took a while for me to understand the art of lighting the boiler. Dry grass, small dry twigs, all my camping skills came in handy to get the donkey on fire. But by the time I mastered it was time for us to leave Cheetah View. 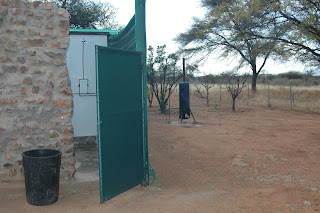 Our three sided shower with the donkey at the background
There was little time for the participants to really sit and have a chat in the evenings, but got to know them mostly during the sessions. The participants came from varied backgrounds. Gert the South African was the most hilarious and researches to reduce economic loss due to wildlife using GPS radio collars, the wise old owl Ian, an Australian, had traveled round the world before he decided to settle down in Zambia and now manages a national park, Ceril works with farmers in South Africa promoting the Anatolian sheep dog to protect livestock from leopards and cheetahs, Mona, an Iranian educates about the last remaining cheetahs in her country.
The course also took us to the great Etosha National Park and to rural villages of Nambia to understand human-wildlife conflict. While the course went on I also planned visits and had a cordial offer from Emsie and Chris to visit them in Rhino Camp, the wilderness lodge they worked for.

Next blog: Rhino Camp and the desert lions
Posted by Unknown at 6:19 PM 2 comments: 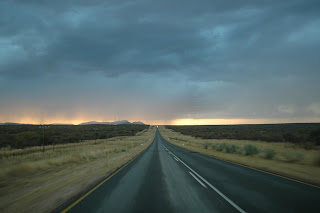 No curves in Namibia
I was excited when I was selected to attend a course on human-predator conflict management in Namibia. A country I knew very little of, but was sure that it abounded with wildlife. The course would take place in the remote regions of Northern Nambia.

After a long journey (Bangalore-Mumbai-Johannesburg-Windhoek) the aircraft landed at the Hosea Kutako International airport about 45 km from the capital city Windhoek. I wondered if the airport would qualify as an international airport as ours was the only flight that was there. After filling in the necessary swine flu declaration (that I was not carrying the infection with me) and necessary visa clearances, my taxi headed towards my destination: Chameleon Backpackers, that's where I would stay before I would head north for the learning.

The drive from the airport to the city amazed me. The road was so straight and the landscape was dry with scrub forests all along. Signposts of warthog and Kudu crossings were common! The taxi driver Henry, a colored (of mixed race) spoke to me about Windhoek and his regular taxi life. Finally a 30 minute drive brought me to Chameleon.

The capital city had a population of 200,000 inhabitants, and the entire country two million! No wonder the streets of Windhoek looked empty. I spent the next two days strolling around in the city. Though the country does not have too many Indian faces, surprisingly I met Routrey and Firoz, two Indian Air Force technicians maintaining 'one' helicopter HAL had sold to the Namibian Air Force. Four IAF personnel have been staying here for the past 15 years training Namibians to handle this chopper. Routrey asked surprisingly "the high commission does not know of your visit?". He was under the impression that I had come from the Government, fortunately no, I thought. They updated me that there were fewer than 50 Indians in Windhoek, Taal was the only Indian restaurant in the whole of Namibia and other local issues were part of the introductory discussion. I felt they were also looking for someone from homeland to talk to. How long would they be talking to their team members of four!.
Posted by Unknown at 4:08 PM 5 comments: