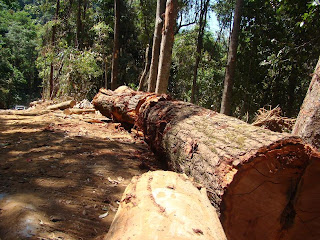 
I recently read about the film Well Done, Abba! made by one of India’s most respected directors, Shyam Benegal. The film is about a stolen well from a village. It highlights how corruption led to non-existent wells in a village and these ‘ghost wells’ were challenged by a father daughter duo.

Reading about this in the book Non-Stop India by Mark Tully, former Chief of Bureau, BBC New Delhi, I could not resist drawing parallels about a recent problem we worked on in the Western Ghats; the ‘green energy’ projects. The state of Karnataka is grappled with severe shortage of electricity leading to several measures from the state including encouraging power generation from renewable sources.

A case in point is a run-of-the-river power project (popularly called as mini-hydel) being built in the Kenchanakumari and Yedakumari Reserved Forests in Hassan district. The location of the project would impress anyone interested in forest and wildlife conservation. Multi layered forests, lofty trees, epiphytes, climbers, gushing streams; a perfect rainforest habitat. The landscape is home to tiger, elephant, hornbill, Travancore flying squirrel, Nilgiri marten and many other wildlife species all protected under India’s premier conservation legislation, The Wildlife Protection Act 1972. The area even hosts two frog species, Gundia Indian frog and Kottigehara bush from, that are found nowhere else in the world.

The project proponents, Maruthi Power Gen (India) Limited, have permission for two projects to be built in the same location including the same survey numbers, and of course they claim to be constructing two projects. However at the project location one would find that one of the power projects is ‘missing’. Inspired by Well Done, Abba! I am tempted to file a police complaint as it would deceive a power starved state from producing nearly 20 MW of electricity. The state has sacrificed forestland; huge subsidies have been given using tax payer’s money and even by international agencies such as the United Nations Framework Convention on Climate Change (UNFCC). So how can we afford to have a ‘missing’ project?

So where has this power project gone? The records in the Forest Department which is the competent authority to give permissions is straight. It clearly states Maruthi Power Gen (India) Limited is allowed to construct two power generation projects of 18.9 and 19.0 MW in survey numbers 1 and 16 of Yedakumari Village in the Kenchankumari and Kagneri Reserved Forests. The forestlands diverted to the projects are 4.18 and 4.20 hectares which has been fully utilized. However one of the projects is missing. There is only one weir, one power house (in construction phase) and all other components required for a power generation unit stands as one project. 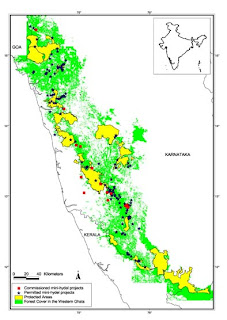 Siting of some of these projects are a cause of concern as they would completely break the corridors of wildlife between south and central Western Ghats in Karnataka.

Misleading the Forest Conservation Act
On detailed scrutiny the story unfolds. If forestland to be diverted is above 5 hectares then the project proposal would be referred to the Forest Advisory Committee (FAC), a legal body setup by the Ministry of Forests and Environment under the Forest Conservation Act 1980, which scrutinizes forestland diversions. However this mini-hydel project required about nine hectares of forestland. So, conveniently the project was split into ‘two projects’ and sanctioned to bye-pass the FAC inspection.

Similarly any power generation unit that produces above 25 MW will be considered as a normal hydel project and becomes mandatory to carryout Environmental Impact Assessment and public hearing. So, the project investors again divided the project into two projects of 18.9 and 19.0 MW to avoid following the mandatory norms. Going further if the project was above 25 MW it would be ineligible for the all the financial incentives the Government provided. Even UNFCC provides cash incentives as these are power generation initiatives purportedly having no impacts on the environment unlike large hydel projects which involves submergence of vast forest areas and at times involves relocation of people.

However the truth on-ground is that these ‘green-energy’ projects have been located in some of the most critical wildlife corridors that are extremely fragile and rich in biodiversity. Throwing all natural justice norms to wind the local authorities have given a clean chit saying that no wildlife exists in this area nor it is an ecologically sensitive area. Ironically the same local forest administration authorities are now claiming that land from farmers should be acquired as they face severe conflict with elephants in this same area!

Paradoxically our stringent wildlife and forest conservation laws are violated with little understanding or respect for our natural world. In a bizarre step the Karnataka Renewable Energy Department, the Government arm to promote renewable energy sources has permitted 44 mini-hydel projects against the River Nethravathi in the Western Ghats of Karnataka. It would become impossible to call this as a river if the water is dammed and stored at 44 locations. A total of 72 such run-of-the-river power generation projects have been sanctioned in the Western Ghats of Karnataka.

Everyone encourages renewable energy generation. However in this case the siting of these projects is the cause of concern. If our central ministry be interested to open these cupboards to delve into the violations, certainly more skeletons will roll out.  Economic growth is slowly chipping away our wildlife habitats, systematically destroying our precious natural heritage using the magic word ‘development’. However this development should not be at the cost of the few swathes of natural forests left in the country.

An edited version of the article was published in Hindustan Times on 21-12-2011
http://www.hindustantimes.com/News-Feed/ColumnsOthers/Greedy-for-growth/Article1-785081.aspx

In a just society, no justice for wildlife

The art of saving wildlife is a lot more complicated these days than it was earlier, even five years ago. Any move under the banner of wildlife conservation is today vehemently opposed, though not always from genuinely affected groups. Wildlife conservation has little patronage, rather it’s everyone’s whipping boy today. Some politicians have even taken this as a subject to rabble-rouse to gain political mileage.

The Forest Department which is the sole authority to manage and implement law enforcement activities in PAs is already opposed in their day-to-day affairs. In this scenario there are few initiatives that the department or those working on wildlife conservation can propose to implement.

Opposition has several reasons including from those with genuine reasons. However it mainly roots from misinformation and false campaigns. The recent victim is the intention to declare Eco-Sensitive Zones (ESZ) which allows judicious development around PAs. This is mandated to the department under the Environment Protection Act and a recent Supreme Court order. ESZs are to act as cushions to PAs where activities in the immediate vicinity of PAs would be compatible with that of wildlife conservation. These zones are to be delineated based on ecological importance of areas outside the PA boundaries. For instance, ESZ could consist of legally protected or unprotected forests which act as important wildlife corridors connecting other PAs, or villages that lie on the immediate boundaries of PAs.

However rumors have been floated that livelihood practices of communities living on the edge of PAs would be literally halted, obtaining electricity for housing or farming would be prohibited and such other distorted propaganda. If one would look carefully through the guidelines of ESZ it could well be utilized for the benefits of those living on the periphery of the PAs.

The conflict of land acquisition for developmental projects has gained gigantic proportions in the country with several thousand farmers fighting to save their lands each year. ESZ is a tool that could help people to mitigate this, atleast those that adjoin PAs. Setting up heavy industries on the PA boundaries are not favorable to wildlife conservation, neither does farmers want to part with their land for such purposes. Similarly land in critical wildlife corridors could also be protected from unscrupulous land grabbers, exploiters of natural resources and others who have effectively blocked many wildlife corridors in the name of tourism, granite stone quarrying and others. This is evidently seen around Corbett, Bandipur, Panna, BRT Wildlife Sanctuary and many other PAs in the country.

Conservation in practice is more to deal with crises and opportunities. ESZ poses a suitable opportunity for conservationists, whose time is largely swamped with firefighting activities, to take pre-emptive action. Instances of infrastructure, mining and other projects threatening several of our key wildlife habitats are numerous. Corbett, Kanha, Pench, Ranthambhore are all threatened by proposed highways, diamond mining has been a perennial problem for Panna and the list of such predicaments to PAs or critical wildlife corridors are long, eating up critical time and resources of several civil societies. Hence the burden to provide the stimulus should rest on the shoulders of civil societies to make this very important piece of legislation to be implemented and enforced on-ground.

ESZ gives conservationists an opportunity to arrest the loss of habitat connectivity and other insuperable odds that are bid against wildlife conservation. It will help us to have permeable landscapes especially for species that need to move between PAs in search of new territories for survival. Instances of tigers moving distances of nearly 300 kilometers have been recorded from Karnataka. If these connectivity routes are unprotected, as they are today, they would be filled with industries, highways, power projects, gas pipelines and other such developmental activities that may be important for economic prosperity but would act as permanent blocks for certain wildlife species.

In a just society there should be equal opportunity for everyone including non-human life forms. However wildlife conservation does not have a level playing field. It’s further weakened by high levels of political interference and lacks voice in the Government. In totality it’s nobody’s constituency. Those seriously interested in conservation are also minority in voice and gain little mileage with people who could change things on-ground. They are even looked as untouchables from the vast majority, even in the eyes of those who are in the vanguard of environmentalism.

So, it’s time to brace up so that land use around PAs would be in line with wildlife conservation and could directly benefit both wildlife and people.

Posted by Unknown at 9:33 AM No comments: