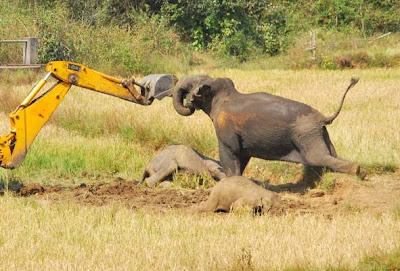 The heart rendering images of a mother elephant guarding carcasses of two calves in Vatepura, Hassan district caught the attention of the country a few days ago. The unfortunate calves had died due to electrocution as the farmer connected live wires to the fence trying to halt elephants entering his crop fields. Another calf died of similar reasons three days later. The issue of human-elephant conflict is now again in the forefront.

It ought to take centre stage. This is the season when the crops are ripe, harvested, stored and elephants see it as the best opportunity to find high nutrition food outside their forested domain. Atypical of the general viewpoint that elephants come out of forests during summer due to lack of forage and water availability, elephant crop raids are high during post monsoon and ends before the onset of summer. There will only be stray incidences during summer. Whatever the season, the issue needs to be ironed out to reduce human deaths and crop losses.

Solutions are at one of the end of the concern, but dissecting the problem is perhaps the most important of the priorities as it can possibly avoid future altercations between farmers and elephants.

The geography of Hassan and Kodagu districts, where the human-elephant conflict has reached alarming rates, changed at unprecedented rates during 1960-80. The immediate victims of this changed landscape were its non-human inhabitants. Several wildlife species may have gone locally extinct and some like the elephants, a hardier species, have held on. But now they face a bleak or no future.

The construction of Harangi, Hemavathi and Chiklihole reservoirs, the flumes that carry water for cultivation and other related disturbances in the form of large-scale human settlements due to these construction activities have all led to one serious problem; loss and fragmentation of elephant habitats. These developmental activities ensured that the northern forests of Kattepura, Yadavanad-Aanekaad were disconnected from the southern forests of Dubare, Mavukal, Devamachi, Anechowkoor which further connected them to Nagarahole National Park. As a result the northern elephant populations are now disjointed from their southern habitats.

The connection to Pushpagiri, Talakaveri sanctuaries has long been broken due to widespread agriculture. Finally the forests on the western slopes of the Ghats have been sliced due to linear intrusions such as highways, power lines, pipelines, railway line and recently by mini-hydel projects. In this area the elephants get to the end of their habitats even if they stretch their trunks.

These small numbers of elephants now isolated amidst human habitations and crop fields are the cause of conflict in the region. Unfortunately the people in this area are bearing the burnt for the mistakes of planners during the 60s and 70s. 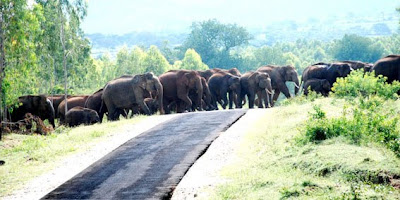 Developmental projects have to be realigned outside elephant habitats. Pic:DH File

So are the Government agencies serious about solving the problem? Of course, they are. It is difficult to bear the wrath of farmers and families those have lost lives to elephants. Recently when I suggested to Hanumanthappa, park warden of Bandipur National Park about new conservation initiatives that could be implemented in his jurisdiction his affirmative answer was “if we can handle this conflict issue I will dedicate myself to any conservation issue”. So conflict reduction is on top of the list.

There has been spurt in Government investment on installing more physical barriers to control elephants entering crop fields or human habitations. It’s not difficult to invest. However the crux remains in maintaining these assets. Past experiences clearly show that problem reduces only if there is efficient upkeep.

Similarly farmers invest on electric fencing for crop protection. But a few of them connect the fence with live wires directly to 220 volt lines and sometime even to high voltage distribution lines. These are the death knell to elephants killing them instantly when the animals come in contact with the fence.

Co-operation of local farmers to monitor these mitigation measures is extremely important. An experiment of shared farm fencing initiated up by M.D.Madhusudhan of Nature Conservation Foundation has seen excellent results on the boundaries of Bandipur. 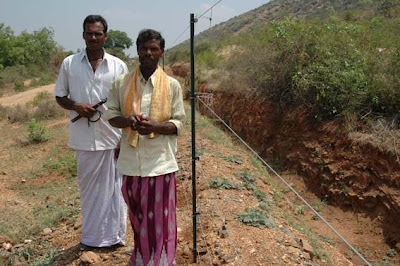 Maintenance of physical barriers and co-operation of farmers is very much essential for it's success. Pic:Sanjay Gubbi

A late afternoon drive on the fringes of our protected areas will give you a perspective of the livestock that graze inside these forests. Thousands of livestock would be returning after daylong forage inside the forests. This is a widespread conservation problem in most of our elephant habitats. Livestock grazing deprives elephants of their palatable forage forcing the pachyderms to raid crops. Perhaps people do not even realise that the livestock they herd into the jungles every dawn are indirectly responsible for their crop loss. But once strict enforcement is carried out herders vent their anger by lighting forests on fire further lowering the quality of forage for elephants.

Preliminary results of a study conducted by us shows that five crop types suffered 86% of the conflict around Nagarahole National Park. There are no prizes for guessing the top five; finger millet (raagi), maize, cotton, paddy and sugarcane. Can farmers think of alternative high economic return crops? Perhaps crops such as turmeric, ginger, chillies that are unpalatable for elephants are better suited to farm in these areas. Finally it’s the economic returns that matters. Improved post-harvest storage of crops making them inaccessible to elephants can reduce conflict to a degree. 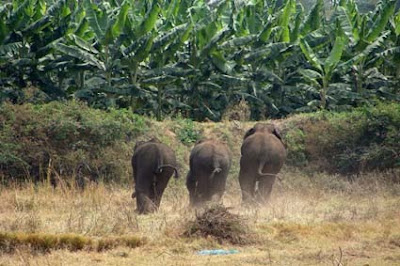 The cultural and religious bond people held for wildlife and tolerated their losses is fast eroding. Can we complain when losses are so high? It’s not easy to see efforts of several months been trampled within few minutes. Similarly elephants next to a home built with fragile mud walls are not comforting either.

Eventually the Government will decide to remove these elephants, and the elephant ‘menace’ in Hassan district may come to an end. The elephants that once roamed these forests will be locally extinct. Does it matter? In Karnataka local extinction of elephants is not a new phenomenon. Sharavathi valley, Shettihalli, Saagara, Soraba and its adjoining areas and Uttara Kannada (though a very small population of about 20 survive here) have all lost elephants. They now survive as a strong population only in the southern Western Ghats of Karnataka. However if serious efforts are not made the story of Hassan will be repeated in other areas in the coming years.

All of us need roads, railway lines and other developmental projects. But the story line needs to change. It’s a matter of realigning these projects to bye-pass elephant habitats. This is not going to cost heavily when compared to the ecological, aesthetical and economic benefits elephants bring to our society. The elephant’s habitats are at the mercy of a few decision makers who will decide where next will the excavators and other large earth moving machinery will rip the nation’s heritage animals’ domain.