There are a few cities in the world that host large wild mammals in their neighborhood. Of these, the well known is the Nairobi National Park adjoining Nairobi one of the busiest cities in Kenya where the city residents have large wildlife as their neighbors. The African big five, giraffes, zebras, cheetahs and several of Africa’s large wild mammals have all survived in the neighborhoods of this city. Pictures of giraffes, zebras, and lions with the cityscape in the background are plentiful on the internet.

Even in India, there are a few large cities that host large mammals on their outskirts – Delhi, Mumbai, Bengaluru to name a few. Amongst these Bengaluru is perhaps unique as it hosts a variety of large wildlife within a few kilometers from the city center (say Vidhana Soudha). Elephant, gaur, sambar, leopard, sloth bear, wild dog and even a tiger has been reported on the outskirts of Bengaluru. However, a common feature of all the cities that host large mammals is that they hold natural landscapes on their boundaries. This is nothing different in Bengaluru. Patches of rocky outcrops, scrub forests continue to exist in small patches in the outskirts of this ever-growing city.

Reports of livestock lifting by leopards are not uncommon in parts of the city outskirts where rural life continues to linger. Occasionally, the residents of apartment complexes on the southern side of the city, near the NICE highway, report sightings of leopards. When such incidents are reported, the response is a demand to translocate the animal. The forest department has translocated six leopards in the past five years from the city’s outskirts.

Due to our interest in large cats and request of communities and forest department, we initiated camera trapping on the city’s outskirts. Our study provided some wonderful insights into the lives of these spotted cats. Though we had a few leopards walking in front of our automatically triggered photo-documenting devices, at times the sequence of images was more interesting. At one location chitchatting senior citizens walked past the camera traps for their evening walks and a few hours later sub-adult leopards would trigger the same camera traps. A couple of kilometers away young school children walked displaying their playful performances for the cameras, and a few hours later adult leopards would imperceptibly appear as the human activities drew to a close. In some places, leopards revealed their presence in maize fields but disappeared as soon as the crops were harvested. Tall standing crops such as maize perhaps acted as a good cover for the felid.

Our spatial information on the leopard occurrence on the city’s outskirts seems to tell us a trend. Leopards mostly seem to occur within natural habitats, such as rocky outcrops and forest patches, from northwest to the southern side of the city in a semi-circular form but also use agricultural areas such as maize fields. The message seems to be clear. Leopards survive in areas where there is a mosaic of natural forests, rocky outcrops and sub-optimal habitats that provide temporary cover. They are certainly not living amidst a sea of humans, amidst residential and commercial buildings. I wouldn’t call these as urban leopards. Natural habitats seem to be key for leopards’ survival.

However, I wonder how long would these felines survive on the borders of this ever-growing city? Bengaluru’s human population grew by 47% during 2001 and 2011 increasing it from 6.5 to 9.6 million currently matching the population of New York metropolitan area. The size of the city has increased over 300 percent in the last 20 years. Tens of villages and forest patches around the city have now been merged into the city council limits. Areas that meet the definition of forests have mostly made way for industries, housing complexes, and other developmental activities. Most leopard natural habitat on the city’s outskirts may vanish sooner or later if concerted efforts are not made.

As urban areas expand natural habitats of leopards shrink resulting in local extinction of the or survive in natural habitats. For instance, leopards that existed in Thurahalli forests have now blinked off as this small reserved forest (2.5 km2) is now surrounded by housing complexes and its connectivity to the BM Kaaval Reserved Forest and further south to Bannerghatta National Park is severed. Such local extinctions have even been documented well in this country’s history.
Leopards will continue to exist in Bannerghatta National Park that adjoins the southern side of Bengaluru city. However, the land around Bannerghatta is getting highly urbanized. The northern and western edges of the national park are already ensconced in a sea of development. So, leopards that live inside Bannerghatta could venture into urbanized areas due to easy access to domestic food sources including dogs and livestock. Not an ideal situation either for the leopard or for the people. However, take out the forests in Bannerghatta there would perhaps be no leopards in this area.

Luckily, Bannerghatta is connected to a few reserved forests in Tamil Nadu and importantly to Cauvery Wildlife Sanctuary, through a very narrow corridor, to its south. This will act as insurance for larger wildlife to survive in the long run in Bannerghatta. Going across the globe, the scenario in Nairobi National Park is no different. Part of the national park connects to other larger tracts of the woodland savannahs that continue for hundreds of square kilometers. So these natural habitats support the long-term subsistence of large mammals in this national park, and so would Bannerghatta.

Communities and leopards
For our work, it is also necessary that we interacted with communities who have share space with the spotted cats around Bengaluru. We regularly carry out outreach activities to bring in awareness about leopards and ways to respond if leopards were sighted in the vicinity. Many a times, wrong identification of animal tracks has led to commotion in communities hence developing appropriate outreach material was very critical. The range of people we needed to speak to itself makes an interesting case study. Retired professionals, security personnel, space research scientists, central security force personnel, students, construction workers and the list go longer. Not the typical outreach target audience one would envision in wildlife conservation. But we also had villagers, farmers to talk to.

The responses of communities towards leopards are very varied. On the outskirts of Bengaluru, two distinct communities share space with leopards. Educated, professionals economically not dependent on land or animal husbandry but like to be away from the hustle-bustle of the city hence reside in areas that have a mix of natural leopard habitats and agricultural landscape. Secondly, communities who reside in similar ecological landscapes but whose lifestyles are largely rural in nature, and continue to depend on farming and livestock for livelihoods. There seems to be better acceptability among people whose livelihoods does not depend on farming or livestock. Nonetheless, even these people were always anxious.

Bengaluru is an ideal example where changing ecological, social and economic landscapes of the country demonstrates the altering fate of some of the wildlife species. Urban civilization and industrialization have crouched in the city’s environs and leopards have been losing ground. Many of city’s former leopard habitats - Kengeri, Hebbal, J.P.Nagar, Turhalli are all now bustling residential, industrial or business hubs. Now a Google search for ‘J.P.Nagar’ ‘leopard’ lists out interesting results; Leopard Securities Services, Leopard Investments, Leopard hi-heel Suppliers, and, unfortunately, the former true leopards have made way to these ‘urban leopards’.

An edited version of this article was published in www.jlrexplore.com 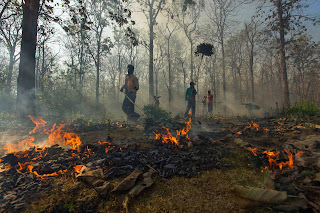