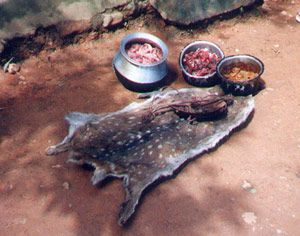 In the noose and under the gun 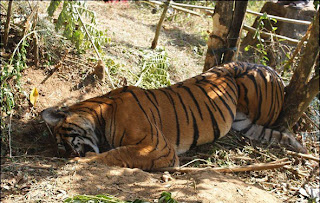 Images of confiscated tiger or leopard pelts seem to be a common feature in Indian media these days. There is an escalation in seizure of wildlife products depicting either increased vigil by enforcement authorities or increase in poaching incidences or a combination of these two. Interestingly, the species confiscated are more diverse than earlier. In the past, wildlife products confiscated mostly consisted of parts from rare or economically prized wildlife species such as tiger, leopard, otter and elephant. Now, even common species are increasingly finding their place in the list of seized materials. Barn owl, sand boa, soft shell turtle, axis deer and many other commonly found wildlife species are incessantly targeted by poachers. Similarly, the quantity of tiger and leopard pelts and elephant ivory seized has been on the rise. It looks like the booming economies of China and South East Asian countries have increased the demand for wildlife products.

Poaching of wildlife happens at two scales, for meat or for body parts. Hunting for meat is largely carried out by individuals or by loosely formed groups targeting high meat yielding species, or species that are high on the list of taste buds.

Hunting for body parts is controlled by organized syndicates. Shockingly, loosely knit local poachers are now trying to hunt high value wildlife species to find their way into the organized syndicates. Many accused recently arrested with tiger and leopard pelts confess to have opportunistically poached big cats or collected elephant ivory in the hope of finding ways to sell their valuable catch uncovering a disturbing trend.

Interestingly, several of the people recently arrested trying to buy common wildlife species are from the real estate business. At a period when real estate profits were low, it is believed these entrepreneurs relied on black magic to enhance their profits.

People hunt wildlife for sport, religious reasons, to earn supplementary income and some with large income motivations. Humans have been hunting in the tropical forests for 100,000 years. So what is alarming about wildlife poaching? The fact that the scale and consumption levels have gone beyond sustainable levels, atleast in the Indian context. Science says that wild meat hunting will be unsustainable when human densities exceed 1 person/square kilometer. Unlike in some parts of Africa, South America and small parts of India, people do not depend on wild meat as a primary source of protein. Wherever hunting is sustainable it is only due to the fact that human densities are so low that offtakes do not make any dent on wildlife populations. 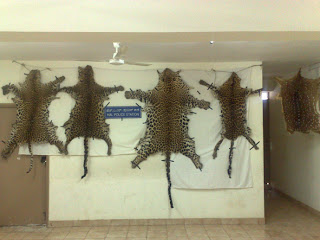 Leopard pelts are being increasingly seized by enforcement authorities - ©Sharathbabu

Effects of hunting
Hunting is a loser’s game. It affects wildlife at various intensities including at individual , population  and landscape levels. Hunting leads to decreased wildlife densities. In some cases even if the species is not locally extinct, it would not be performing its ecological functions due to the miniscule numbers; hence can be considered as ‘ecologically extinct’. Hunting of bird species such as hornbills, that provide key ecosystem services through seed dispersal, could upset the forest complex as plant species dependent on hornbills for dispersal can go locally extinct.

India lost tigers from Sariska and Panna tiger reserves during the last decade and media increasingly reports stories of confiscated wildlife products. So have we taken our eye off the ball? Increasingly, our focus and determination to carry out old fashioned activities has given way to other conservation enforcement strategies. The time tested foot patrolling is key to control wildlife poaching. Success stories, at least in parts, have come through dedicated long-term efforts of a few forest officials well supported by their ground team who believed in this fundamental practice to combat poaching.

Wildlife numbers bounced back under these situations. Currently, even with increased resources and the best of legislations, few believe in this reliable system. A snare or a jaw trap can be detected only through foot patrolling; there is no alternative to this and unfortunately few care about this.
Behavioral changes in people will take a long time to become a reality. Till people wholeheartedly stop killing wildlife we need our foot soldiers to scan, monitor, and handle poaching as a primary conservation threat. However, to make them more effective and keep them motivated, we need to enhance the incentives provided to these trench warriors. A forest watcher continues to languish in the hot and humid jungles with little amenities. To improve his condition, he needs full support of those  key people in decision making positions. 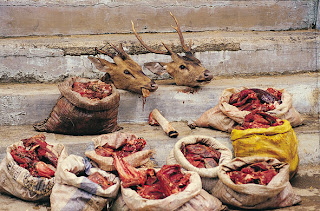 It will be foolhardy not to recognize this renewed conservation threat and appropriately implement strategies to save our endangered wildlife species. Needless to say our hard learnt lessons from Sariska and Panna will mean very little in the larger conservation context.
Some key wildlife species hunted in southern India
*for body parts, & for pet trade, +recent increase mostly for black magic purposes.

Why not farm wildlife to reduce pressure on wild populations?
Though a very attractive theoretical concept, it often hasn’t worked in practice. Field evaluations have clearly shown that people prefer wild animals compared to farmed wildlife products. Crocodiles, turtles, porcupines, bear and other species that have been widely farmed in China and Vietnam continue to face extinction in these countries. Studies show that breeders continue to source meat from the wild and founder stock due to lower costs and higher consumer demand for wild caught meat compared to farm bred animals.

An edited version of this article was published in Deccan Herald on 07-05-2012
http://www.deccanherald.com/content/247584/in-noose-gun.html
Posted by Unknown at 10:43 PM No comments: 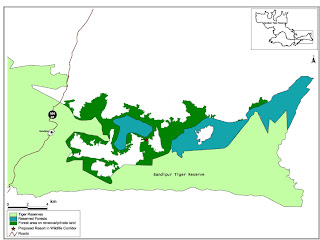 In a few days’ time, the median on the highway from the Bangalore International Airport leading to the city center will have a new lawn and various stone statues. Any small pothole on the highway will be filled and parts of the city will be spruced up. This will be part of the preparations for the Global Investors Meet (GIM).

The Government has taken keen interest in drawing both local and international investment into the state, a laudable effort indeed. In this background it has been successfully organizing the GIM and the next one is now at our doorstep. The most important activity that follows the investors meet is the process for land acquisition for various investments agreed during the meet. For this, the Government has setup a single window clearance system to clear and provide permissions to setup industries, tourism and other projects. Along with this fast track clearance process, several economic impetuses are provided by the Government.  All these are positive steps that bring in more investment and employment opportunities facilitating improvement of our economy.

However, a key element in the process of land allotment for projects seems to be missing the Government’s attention. Some of the projects allotted fall in ecologically sensitive and key wildlife habitats or corridors leading to controversies and media attention. The core of the issue has been that no opinion of forest department or people working in the field has been elicited. As the projects are approved in GIM, investors compel Government officials for speedy clearance of their projects. Several acts, guidelines and norms are violated in the urgency to clear these projects and there are quite a few examples of such clearances from the previous GIM.

The forests on the periphery of Bandipur Tiger Reserve under Bachalli, Kebbepura, Yelchetti and other villages have decent forest cover and act as connectivity corridors for tigers, elephants and other large mammals to move to Mudumalai Tiger Reserve in Tamilnadu. During the previous GIM, the Government approved a tourism and Ayurveda wellness resort in this vital corridor. This resort, if constructed, would have permanently severed this fragile corridor. Fortunately, due to the efforts of conservationists and forest officials, this project has currently been put on the back burner.

There are other examples of industries creeping next to our biologically diverse areas. The dry plains of the state have very few protected areas, and Daroji Bear Sanctuary is one of the few areas in the country earmarked for sloth bear conservation.  The sanctuary is a unique effort on part of the Government of Karnataka to protect sloth bears. However, a recent short-sighted proposal to set up a steel plant right on the boundary of this unique wildlife sanctuary has raised controversies.   A scientific report by wildlife conservationists and prompt response of the previous forest minister supported by the Chief Minister ensured that the bear sanctuary was protected. If the state had preferred steel to bears, it would have unquestionably attracted the wrath of the Supreme Court and the Central Empowered Committee.

A sugar mill has been permitted on the borders of Biligirirangaswamybetta Wildlife Sanctuary- an important habitat for tiger, elephant and other large mammals apart from several other lesser known taxa. The pollution impacts of the sugar mills on wildlife would have proved disastrous but for the laudable efforts of a few local forest officials, the project hasn’t materialized yet.
Investors look for best returns on their ventures. They may mean well and are perhaps unaware of the ecological importance of their project locations. The goal is not to oppose every developmental activity but to keep them away from ecologically sensitive areas, critical wildlife corridors, national parks and wildlife sanctuaries.

It has been announced that tourism would be a focal subject of this year’s GIM. The districts of Mysore, Chamrajanagar, Coorg, Chikmagalur and Uttara Kannada which have high forest cover would be attractive locations for tourism investors. Most would dress their projects as eco-tourism investments and would be enthusiastic to construct lodges in attractive locations. Unfortunately, these resorts would have little interest in wildlife or nature conservation, and obliterate the very habitats in whose name the lodges would be setup.

In the west during 19th Century, industrial revolution, forest destruction for timber industry and hunting led to extinction of several of its important wildlife species. Wolves from Scotland, bear and lynx from Switzerland, European bison from Poland, bottle-nosed dolphin from Netherlands, Northern bald ibis from Spain are a few of the several species Europe has lost. These countries are now interested in spending heavily to bring back the species they have lost. It is wise to learn from the hard lessons learnt by these countries.

How we manage our common lands, a severely limited resource, will define the overall sustainability of our country. Less than five per cent of our country’s geographical area is dedicated to wildlife conservation. If we keep away our industries, tourism projects and other developmental activities from these biologically diverse areas, there will be no dent in our goal of achieving the nine per cent economic growth.

An edited version of this article was published in Deccan Herald on 08-05-2012
http://www.deccanherald.com/content/247723/gim-investment-ok-not-cost.html
Posted by Unknown at 11:12 AM 1 comment: