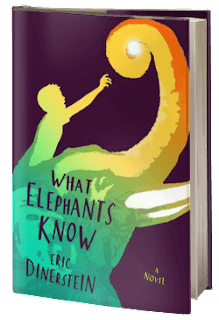 It’s been a while since there was a novel based on natural history, wildlife, and life in the jungles. This is perhaps What Elephants Know has tried to accomplish. Authored by Eric Dinerstein who spent time in the Nepalese jungles of Bardia district in the mid 1970s, initially studying tigers as a Peace Corps volunteer. He later returned to study the Indian one-horned rhinoceros for his doctoral work. The book itself is inspired by the elephants, and the game scouts, the author had worked with during his research work. Hence the book shows out the intimate knowledge the author has for this place. The idea of the book itself has taken birth on a star-filled night in one of the wildest spots in Asia.

The story takes place in the low, flat land along the border between Nepal and India at the base of the Himalayas where a young boy Nanda Singh, fondly called Nandu, hits up with a plan with his friend Rita to save their elephant stable being closed. But to succeed, they’ll need a great tusker and the story takes the turn into another adventure. While their struggle to save the elephant stable and his larger community of mahouts is the major plot of the book, there are several other subplots that are interwoven beautifully to make it a very readable novel. The story develops at an even pace and keeps the reader’s attention to the end.

Nandu was found as a toddler by his foster father Subba-Sahib, a head elephant keeper, while on his regular rounds with elephants in the forests. Initially under the protective watch of a pack of dholes, the wild canids of Asia, Nandu grows up under his foster father in a royal elephant stable. He considers Subba-Sahib as his father, and Devi Kali, an old, affectionate female elephant, at the stable as his mother. Perhaps Devi Kali is the best character in the book that brings out human emotions in elephants which is possibly true if one considers the way elephants care for their young ones in the wild. Some sections that detail the relationship between Devi Kali and Nandu are movingly constructed.

As Nandu grows up destined to become a mahout, he discovers plants, animals, good and bad people, teaching him life’s critical skills. The book grips you and can make Nandu the new Mowgli. The book takes the reader across to the magical world of Nepal’s forests. Every detail of how a mahout commands his elephants, or the description of forest flowers, birds, animals, animal behavior are authentic to the last word, except on a couple of occasions which is perhaps an integral part of any fiction writing.

What Elephants Know is perhaps more than a story of the talented, young boy who is enchanted with elephants, and other wildlife around him. It is told from the perspective of the young boy, hence has everything that interests him. But, it also has very nuanced teachings for life, and I am sure many would benefit from these sagacious words that come out of the mouth of wise men, who are important or supporting characters in the book, neatly woven into different sections of the story. The underlying themes of patience, karma, kindness, and generosity are all stated boldly but without force. Nandu also has to confront issues of cultural identity, political corruption, environmental ethics, and other issues the society faces.

The language is simple but elegant and has an excellent flow. I think few can pen like Eric, where he has combined his field observations into a novel. My favourite line from this book is when Father Autry tells his most avid pupil. “Behold Nandu. For me, the peak of evolution was reached before the age of dinosaurs. That is when the ferns of today began to appear. Many have changed in one hundred and sixty-five million years. I wonder, how can nature improve on such an elegant design?”

Eric is known for his non-fiction natural history books, including award-winning books such as Kingdom of Rarities, and Tigerland and Other Unintended Destinations. But, this is his first fiction novel, and in fact an impressive one. Though the book can be easily classified into the fiction genre, it has authentic information on natural history, which makes it difficult it to be purely classified as a fiction.
Though the book is slightly episodic, there’s enough action that counterbalances to make the readers feel it as a genuine memoir. This is a must read for everyone interested in natural history, outdoors, culture, and or simple writing. Perhaps, it cannot be categorised as a children’s novel, as reviewers have generally rated it. Everyone would enjoy it, especially those who know nature from the field. The book really transports you and makes one feel a deeper appreciation for the natural world! I would surely rate it nine out of ten.